Topher will be joining us for WPSession #1: Building WordPress Plugins on June 22nd, 2013.

Where can we find you online? 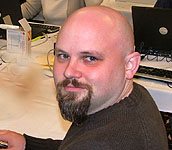 When WordPress first came out I looked at and didn’t like it at all, and decided to make a competitor. I did, and my personal blog still runs it, but I quit advancing it in 2004, and I wouldn’t recommend it to anyone not named Topher. 🙂

What resources to you turn to when you want to learn something new?

It depends on whether I know what I want to learn. If I know I want to learn how to use a specific function, or a process based on several functions it’s always the codex. I love the codex.

If I just have an idea, and I want to know how other people have done it I’m about 50/50 between google and asking Smart People.

Custom Content Types, far and away. I don’t think I’ve ever used WordPress to make a blog, so the flexibility to twist it around to do whatever I want is really really valuable.

What is your favorite WordPress plugin and why?

That’s a tough call. I really like Pippin’s Easy Custom Post Types, but I always feel guilty that I’m not making them by hand. I also really like WP Super Cache. The engineering of caching fascinates me.

Build stuff for yourself, even if it’s already been done. Even if you throw it away as soon as you’re done. Try to use as many different functions as possible, just so that the process of using them is in your head. Then someday you’re going to be working on something and think “Hey, I once used that function to do this other thing, we can use that here”.

Also, ask questions. There’s a fine line between annoying leach and growing rock star. That line is different for every person you’re going to ask questions of, so create relationships with Smart People. Once they know you they’re much more likely to either take time to answer your question or tell you nicely that now’s not a good time, come back later.

Most of the people I’ve come in contact with are very happy to help you understand whatever it is you’re dealing with.

Also remember that just about everyone has knowledge you don’t. Look in more places than Rock Stars for advice. I know lots of people with far less general experience than I have that have done lots of specific things that I haven’t, so for that exchange, they’re one of the Rock Stars for me.

Bonus Question: What is one interesting non-WordPress-related fact about yourself?

I grew up in a house off the electrical grid, and learned to read by kerosine lamp, just like on Little House On The Prarie. Not kidding.

Have any questions for Topher?

Ask them here in the comments and we’ll try to get them answered either now or during the session!