As of this month, WPSessions is officially one year old. This has been an incredible trip!

I built this site in order to better educate myself. The problem I was facing at the time is that I simply didn’t know enough about a certain topic to execute it well in my job. I was frustrated by this for two reasons: 1) I needed to know the information relatively quickly; 2) I didn’t know where to acquire the knowledge. I knew that there were people much smarter than me, and I thought, “wouldn’t it be great if I could just hire them to teach me?”

And then I did exactly that.

In this moment I realized I could do this for a lot of topics, and hire the experts who I believed to be best positioned to teach me more about the things I needed and wanted to know. WPSessions was born!

What have we learned?

In twelve months I have hosted twelves sessions, and I have learned something new in each and every one of them. Here’s a short list of some of the things I’ve learned personally:

Who have we learned from?

I was floored in 2013 when I asked a number of well-known WordPress experts if they would teach me – and random strangers on the internet – and all of them said, “of course!” Over 50 different people, in fact.

We couldn’t hear from all 50 in just one year, but we were able to hear from 34 WordPress experts. I was also able to briefly interview almost every single one of them, and you can click through to those interviews below: 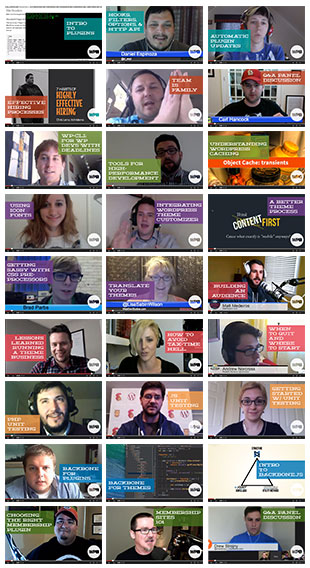 How about the stats?

I suppose the real interesting metrics are the behind-the-scenes details, right? Well I’m going to share many of those, too. First, lets get the base metrics out of the way, then we’ll dive into sales and revenue.

According to Google Analytics, WPSessions has seen over 18,000 unique visitors in the past twelve months, serving out over 100,000 page views across 31,000 different sessions. Can you guess from the spikes which days I announced the next session, and which days held each session?

The most steady graph of all the charts I’m able to produce with my stats is my email subscriber list. I started with exactly zero subscribers on June 1, 2013. I now have over 700 people registered to hear from me 2-3 times per month (if you’re not subscribed and you now want to be, scroll all the way to the end of this article and opt-in).

A useful tidbit for anyone who is questioning, “should I start a mailing list?” – Yes! All of my awesome subscribers have been one of the greatest things about WPSessions. 50% of my list regularly opens my emails (thanks!) and of them roughly 20% click through to whatever I’ve referenced. My numbers are definitely better than many others, and I’ll be writing another blog post that dives into the whys of that in the near future.

On the social media fronts, I saw the same gradual growth on Twitter (@WPSessions) as I’ve now reached 620 followers. Facebook has been a lot slower, only reaching 200 fans in roughly the same period of time. Engagement on Twitter is also significantly higher than engagement on Facebook, and I’m not surprised by that.

I launched WPSessions in 2013 with three major and specific goals in mind: 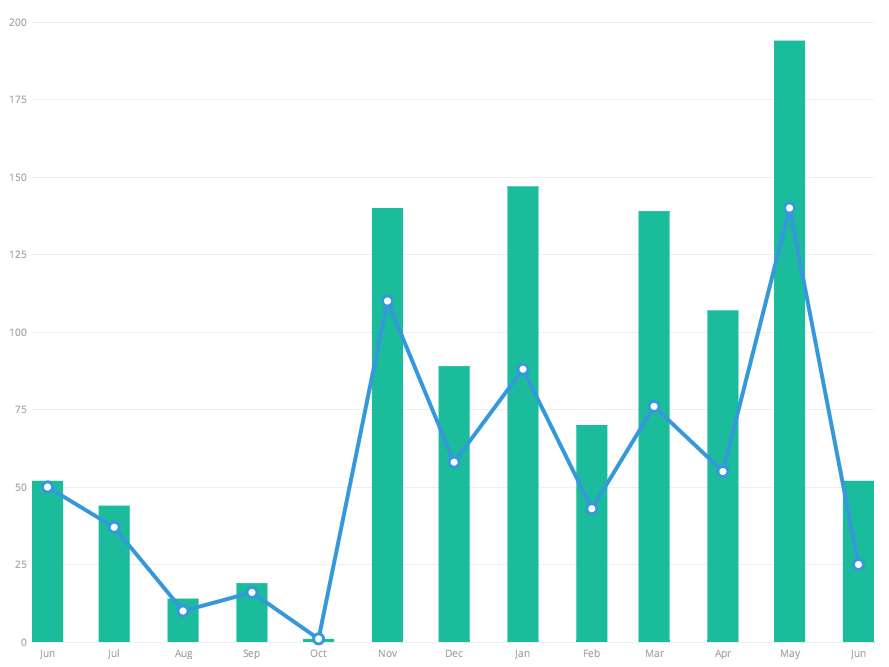 By those metrics alone, I have to say that WPSessions has been far-and-away a smashing success! I have learned a ton, and I know that many of the 709 customers who have registered for 1,304 sessions since June 2013 have learned quite a bit as well. I can’t speak for every attendee, but I know that my skills are measurably better thanks to WPSessions.

To date, WPSessions has paid $4,450 to presenters. There were a few who refused to accept payment, and a few others who requested their payment be given directly to a charitable organization. I’d like to see the amount paid to speakers more than double in the next year, because these experts are amazing and they deserve it.

The “given away for free” metric is the one I’m most pleased about, and grateful for the opportunity to provide. So far I’ve given away more than 785 free sessions by making each session available for free after 6 months. I also gifted 2 VIP Passes back in November and 12 different scholarships for all of the 2014 sessions. All told, that’s over $30,000 in free education.

In the early spring I sent a survey to all existing customers. I received 85 responses, which is a sample size of about 16%. Here are some of the stats I collected: 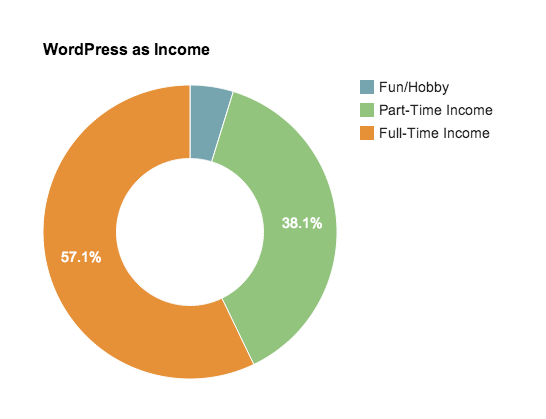 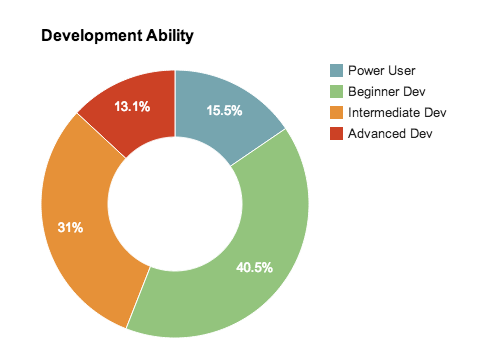 And here’s a stat I thought was particularly neat: half of the respondents who identified as power users (not developers) also said they build and run WordPress sites full-time. A full-time income because they understand their tools extremely well.

I’ve been hesitant to share these numbers, but in the spirit of openness I think it’s only right that I include them.

I should preface this by saying I had absolutely no expectations for profits when I created the site. Ancillary to the three goals I listed above, my only directive was to spend less money than the site was able to generate. I invested a few thousand dollars of my own money up-front to secure presenters and get the site started with the simple hope that I would see that money return to me after the first three sessions. It almost didn’t, and you can see a drop in all the charts where I took some time to evaluate whether or not I could afford to keep the site running.

But, I pressed on and was thrilled to see that the site continued to grow month-to-month. 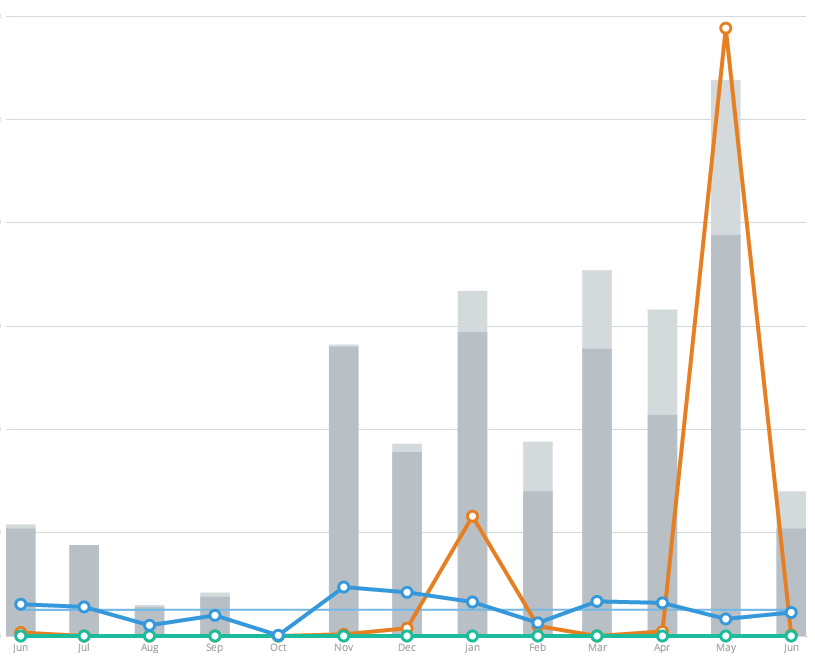 The blue line in this graph is the site’s revenue, and you’ll notice that it has more or less hovered in the same area. Overall, WPSessions had roughly $17,000 in revenue, and roughly $6,500 in expenses. The addition of sponsors in the past two months has aided in WPSessions growth tremendously. That puts the site at roughly $10,000 in profit, which is almost $900/month on average. I think that’s just incredible!

Except, it doesn’t stop there…

Those profits have already been re-invested into something that I’m really excited to share with you in the next two weeks. There are a lot of great things that will be coming to WPSessions in the next 12 months, including multiple thousands of dollars in prizes and give-aways.

In the coming weeks I’ll be sharing more behind-the-scenes stats about what makes WPSessions tick, including the plugins I use to keep the site running, the customizations I made to meet my specific needs, and the research I conducted before deciding on each product and service. The most fascinating news, though, is the evolution of WPSessions, happening at the end of the month.

Until then, I hope you join us for this month’s double-session, Working with BuddyPress, featuring six of the foremost BuddyPress experts. It’s going to be really great!

What do you think?

I’m most interested to hear what everyone else thinks about this year in review. So please, share your thoughts in the comments below. Are you a customer? A casual visitor? A stranger who has just been watching WPSessions from the sidelines? Please don’t be shy 🙂

One reply to “WPS Year in Review”